[SAPPHIC SUNDAY] Don't Forget Your Style When Walking Down the Aisle

I did a little jig when I found out Don't Ask, Don't Tell had been repealed. It's a big weekend for gay equality and it gave me hope in a more personal matter.

DOMA (Defense of Marriage Act) keeps the federal government from recognizing gay marriages performed in individual states. So even if Alex and I tied the knot in 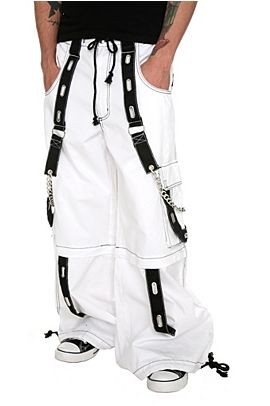 Massachusetts, it wouldn't be legal in Texas, but that's completely opposite for a straight couple. And that is just one of 1,138 rights we are denied.

But yes, I did say marriage. It's something we've been talking about, joking about. Neither one of us really believed in it yet both of us want it now. We've talked hand-binding ceremonies, bridesmaids and "best maids," and, of course, the dresses. I blame a bad episode of Bridezillas.

Alex does not consider herself butch but there's no way she's wearing a dress. Although, her mother is adamantly against her wearing white Tripp pants down the aisle, I don't think a suit is enough. I've read a few blogs and magazine articles about the appropriateness of clothing but your wedding day should be about your style, right? 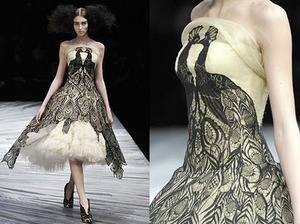 Anyway, I fell in love with her while she was wearing those pants.

As for me, I want the big, statement dress with tulle and frills. Don't ask me about color or designer, I'm not there yet. I am, however, partial to the length and shape of this Alexander McQueen.

We're gonna look like quite a pair... at some point. First, we have to buy the engagement rings and even those are going to be special - neither of us want the solitaire diamond. She likes Mystic Fire Topaz and I like Garnets.
Posted by Style Geek at 12/19/2010 08:30:00 PM

people who believe that there needs to be religion in marriage never seem to be against men and women atheists tying the knot. There's separation of church and state for a reason! MAKES ME ANGRAH!!

And congrats on your possible upcoming engagement? Ahah