[SAPPHIC SUNDAY] When Did Women's Formalwer Become Limited to Dresses?

About five years ago, my girlfriend was almost denied her picture in the high school yearbook because she asked to be photographed in the collar and bowtie. 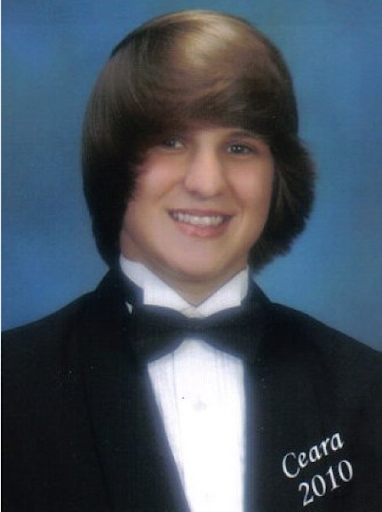 Her mom tried to fight it but, in the end, she conceded to be photographed in a very feminine shawl - very unlike her.

I know it's not the first time it happened nor was it the last (one could only hope) because last year one such case made news. Ceara Sturgis in Mississippi didn't concede and opted for the tux picture. The high school not only refused to run her picture but Sturgis' name was nowhere to be found in the pages. Thankfully, the ACLU filed suit against the Copiah County School District earlier this year, citing discrimination.

The school board seems to be trying to discredit her gender identity, which is at the core of the lawsuit, by pointing out a picture where Sturgis is wearing a bikini top and board shorts to a pool party. How is that even relevant? Would you tell a girl she's not feminine if she wore jeans and t-shirts every now and then? Would you tell the quarterback he's not masculine if he wanted to dress up like Dr. Frank-N-Furter for Halloween? 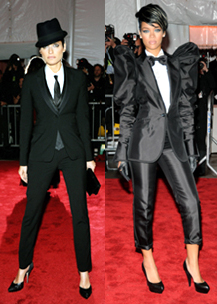 I still don't understand why this is or ever was an issue in what we call modern day. I know we're fighting left and right for gay marriage and the repeal of DADT but it's been socially acceptable for women to wear pants and button-up shirts for decades now.

It seems more sexist than gay. When did women's formalwear become limited to dresses and skirts? Haven't tuxes become sexy ensembles for the fashion forward woman?

Telling my girlfriend and Sturgis that they can't be in their yearbook in tux tops is taking away their right to be remembered for who they are. We live in a society where we express ourselves through our fashion. It communicates to people how we want to be perceived. Should we let someone else communicate it for us?
Posted by Style Geek at 12/12/2010 10:29:00 PM

GREAT POST!!!! Props to your girl friend for trying and standing up for herself!! I also think that a tux on a female can be very sext. Rhianna looks gorgeous in that pic u posted!