[TOP 10 TUESDAY] Busting Out of the Closet: A Corrected List of "Most Stylish Lesbians" 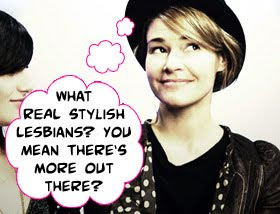 Last week Global Grind published called Hip-Pop's Most Stylish Lesbians, and needless to say, the list was pretty short. So short, in fact, that they just went ahead and added Samantha Ronson and Lindsay Lohan - neither of whom have been confirmed as lesbians (Ronson has confirmed she's bisexual and Lindsay keeps people guessing).

I have nothing against bisexuals, I actually believe they exist, but if the article says "Stylish Lesbians", use all lesbians. You might confuse people into believing that we sleep with men. It sounds absurd but I've seen it happen a lot in media - people using the world "lesbian" when they mean "bisexual". And I blame this media for the guys who hear "lesbians" and instantly think they can get in on the action.

My gay agenda aside, I know there's to be a lack of lesbians in the Hip-Pop Culture - in general media to be more exact - but with a little research, the article/slideshow could have shed light on indie Lesbian music artists and gotten of good variety of stylish lesbians.

With over two million exciting members you can be absolutely certain that there is your perfect single date at azorno.com. Whatever your fantasy, fetish and character personality; we offer a premium adult dating service that is exciting, modern and one that offers real thrills with genuine local adult singles.