Despite an obsession with vampires that started at an early age with books, I've never finished an Anne Rice novel. There are also so many vampire movies I have yet to watch (most of them from the 70's). But despite these looming truths, I still consider myself quite the vampire expert... and I have the lore books to back it up (LOL). 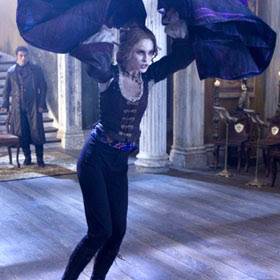 One aspect I love about vampires on screen, as opposed to in books, is seeing how the costume designers personify their age, attitude and overall style. Because anyone who has has been young and nearly immortal for a number of years has to have style (unless you're Bill Compton).

I recently went to see Abraham Lincoln, Vampire Hunter and loved every minute of it. Apart from the premise of vampire hunter who becomes president, the action and cinematography make it a must see. The costumes were pretty much time pieces, though the vampires had some extra touches.

I've noticed this a lot in vampire films - everyone is dressed normally and for their time, but then the main vampires and hunters have outfits that stretch the imagination just a bit farther (for instance Anna Valerious of the Van Helsing movie). That's what a good vampire does - stretch your imagination a bit - and they couldn't do it without the right look.

These are my favorites: