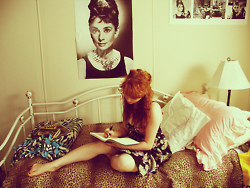 We seem to throw around a lot of words to describe our style and other people's but does that necessarily give us a big vocabulary. There are words that I'm getting tired of hearing, especially when they come out of my mouth or keyboard. Lately, I think the fashion thesaurus could use an update.

But it's not just fashionistas who overuse them, there's a recent trend I've noticed where promoters hijack fashion words for non-fashion related events. The nightlife events sometimes have a "fashionable" dress code (where less is still more) and one of the sponsors is a retail boutique. Cocktail waitresses/models might walk around in the sponsors clothing but, other than that, I don't know if it deserves words like "fierce" and "classy" and I don't know if I'd call the models "trendsetters".

Join me in using some of these words less and hitting the books, namely the thesaurus... because that would be the upscale, modern thing to do. (Thesaurus.com - Stylish)

I love that you are so opinionated! But I have to agree with you the words fierce and diva are definitely over used and thankfully RARELY come out of my mouth!

Love this list. So true I don't even know where to start. I am guilty of chic, but I promise you I'm on my way to shooting people who misuse "couture" and overuse "passion for fashion". Just call me Cat in the Hat why don't you?