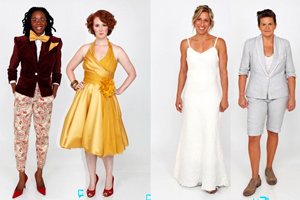 On Tuesday, The Fashion Show challenged contestants to design for engaged same sex couples. Two of the couples were lesbians with very different tastes. I personally preferred Johanna's mustard dress to Christina's classic white. The matching suit did seem a bit too much but I liked the velvet blazer and the bowtie. Alex, however, says she's not wearing a bowtie to our wedding. Damn.

This episode reminded me of the constant debate about having "heteronormative" style at lesbian weddings. On one hand, you tend to find "free spirits" in the lesbian community who want more than the white dress and tux. They feel that those are symbols of a tradition that has never included lesbians. Then there are the androgynous who don't really accept the butch/femme dynamic which is represented in traditional wedding fashions. So we get things like oversized bowties and patterned pants.


On the flip-side, gays and lesbians have been fighting to be accepted into society forever. Marriage is one of those rights that would symbolize acceptance so why make a show of it? The community on this side argue that we'll never be taken seriously if don't conform at least a little. The majority has their views of a wedding and stepping too outside the box discredits us.

I've already talked about my wedding plans once so I won't go into that but I'm on the side that says do what you wish. If you want to make a circus of your wedding, you don't need to be gay to do it - just watch Bridezillas.

I personally wouldn't mind seeing a little bit more crumbling in traditional values, namely the one that says marriage is between a man and a woman.
Posted by Style Geek at 1/09/2011 09:30:00 PM