The first Curve issue of the year just came out and it featured two reality stars from the Real L Word in their wedding dresses. The overall content of issue seemed a bit more femme-slanted so it surprised me when I didn't see that Macy's renewed their ad.

I've been reading Curve for a while now and I never saw a mainstream fashion retailer advertise in it. But back around October/November, I did a mental-happy-dance when Macy's bought a one-page ad. It wasn't one of the usual fashion ads you see in glossies but it was an acknowledgment to lesbians as a consumer. I'm kicking myself for not scanning it right now.

When I look through magazines geared towards gay men like Out and Mate, there's ads for Gucci, Marc Jacobs, Louis Vuitton and Calvin Klein. Not only that but their man-candy has a certain gay-vibe that accentuates the gay male lifestyle. Whether or not they mean to, it feels like advertisers are perpetuating the stereotype that gay men are fashionable while gay women aren't.

Going through Out magazine, I found 13 ads by fashion brands and retailers spanning 20 of the magazine's 166 pages. While it does tout itself as an all-inclusive style magazine, I've found Out to have more content for gay males. So where does that leave us lesbians?

Do we not also buy brand name clothing? Do we not also partake in stylish, luxury items? I know plenty of lesbians who love Diesel, not just the jeans but the brand. But where's our half naked girl telling us to "BE STUPID"? 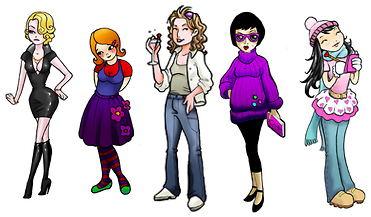 I feel disappointed in Macy's. In my advertising class, they taught us that ad campaigns can take anywhere from 4-6 months to start seeing results. I don't think they gave Curve audience that long.

We lesbians come in all shapes and sizes, styles and genres, just like other women. While the Curve doesn't feature a lot of fashion, style is still prevalent, and the women who read it have style. Some might shop at Macy's, some may not - just like the women who read Marie Claire or Lucky. In a society driven by marketing and consumerism, it's just nice to be considered.