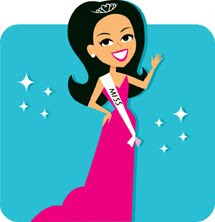 There's an image that comes to my mind when I think of Miss America: a typical beauty who has pageant queen written all over her. She's prim and proper-looking with Vaseline on her teeth and glitter on her eyes. And despite years of modernization and rebranding, that image has stuck. With movies like Miss Congeniality and shows like Toddlers and Tiaras, I'm sure I'm not the only one with this image in mind. But imagine if a girl got up on that stage with a mohawk and a tux.

For years, the competitions have been trying to shake the perception of being "just beauty pageants" by selecting competitors who exemplify leadership qualities and intelligence. Jenelle Hutcherson, a 25-year-old hair stylist, would ideally be a great Miss Long Beach 2012 as she's already deeply involved as a mentor in her community. However, she's an out lesbian whose looks don't quite fit the cookie-cutter aesthetic. She's even planning to wear a tux during the formal wear portion of the competition this coming November (which has been okay'd by the Long Beach pageant boss).

While some people may wonder, "So what?" it's hard to ignore when someone challenges social preconceptions. Imagine if she won - more and more people might get the idea that beauty comes in many different packages (which we all know it does).

Janelle has admitted that it's not about the crown but rather "it’s about getting up on that stage and standing up for what I care about." If you support what Jannelle is trying to do, make sure to Like her Facebook page.

I think this is an excellent idea! Beauty pageants can sometimes drill in the idea that beauty=long hair, a big smile and a nice dress, without much room for manoeuvre. I really hope Janelle does well, as it would be such an inspiration not only to lesbians, but to any girl who doesn't fit the classic beauty-girl mould!