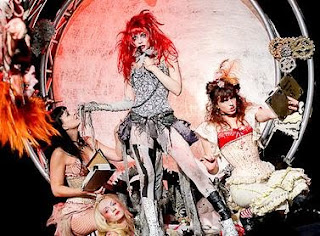 Like I said in my concert street snap post, when Alex introduced me to Emilie Autumn, I wasn't an instant fan. It was her her lyrics, though, that kept me listening - they were dark, angry, ironic, raw but feminist at the core. On top of that, I couldn't ignore her style: beautiful but equally raw.

I think the greatest blow to the feminist movement was the perpetuated idea that feminist were "ugly, unfashionable and masculine" so girls fled from the "feminist" label. But women like Emilie Autumn spit in the face of this 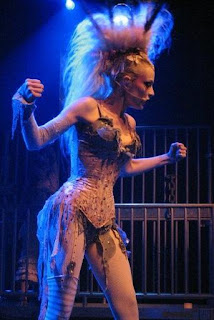 by proudly wearing corsets (a timely symbol of femininity) and singing about the irony of being pretty, how "every skill I ever have will be in question." Her songs point out the strange difficulties of being a woman.

"It’s so easy to kill... If I have to I will...
It’s not pretty but it’s true
I am through lying still, Just a body to be beaten, fucked, And if I’m lucky, left for dead...
I’ll get my revenge on the world...
And if I end up with blood on my hands
Well I know that you’ll understand
'Cause I fight like a girl.."

The concert we went to watch was part of her current tour, Fight Like a Girl. Normally, telling somebody that they do something "like a girl" was derogatory, implying weakness, but Emilie hopes to reclaim that, adding a ferocity that comes from being a woman. And she does it dressed in outfits that exude femininity - corsets, lace, feathers, tulle, ribbons and sparkly rhinestones.

There's a very Victorian element to her style, which is fitting considering she satires that era in her songs. It was a very dark time for women who wanted more out of life - more pleasure, more knowledge, more freedom - as they were usually dismissed as insane and subject to strange medical practices.

Much like taking back "fight like a girl", wearing corsets and frills is taking back symbols of femininity and submission and making them stronger. Women shouldn't have to lose their pretty details to be taken seriously. They should feel free to wear clothing that makes them feel sexy and girly for themselves, not for others' gaze.

I cut and spliced different parts of the concert below. I like how she gives you more than just a concert - she puts on a full production that reminds me of vaudeville and burlesque.