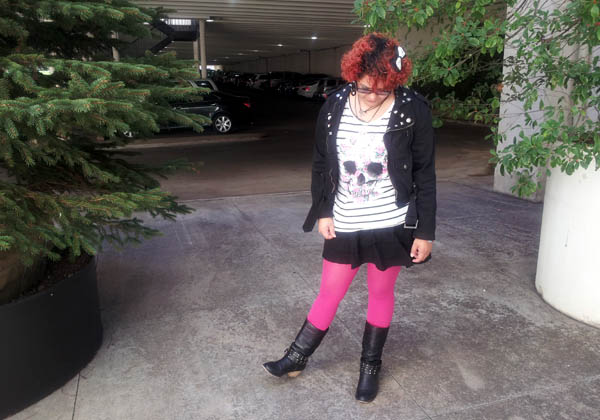 I'm turning 27 in a week. Just three years shy of 30 and I don't really feel like an adult. For a few years now, I've been expecting this AH-HA! moment where things fall into place and everything is clearer (like when I realized I was gay). But, no, the giant hand of adulthood has yet to hit me over the head.

I'm sure this outfit, and various others in my closet, do nothing to help my cause. I've tried dressing "older" and putting away clothing that obviously came from the Juniors section in hopes of tempting the adulthood fairy to sprinkle me with her magic dust. However, I always come back to my poofy skirts, graphic shirts and hair bows - it's what I like, it's what feels the most me. 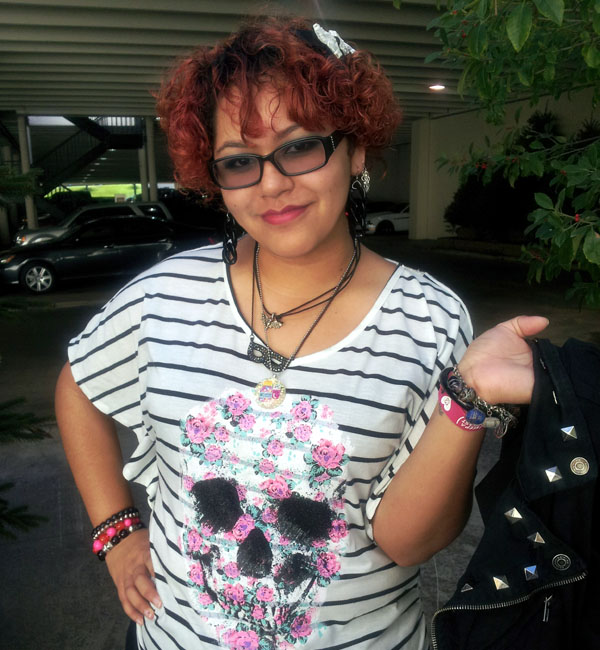 I finally got around to reading my backlog of magazines and found an article in November's ELLE that made me wonder if the adulthood fairy has retired. It seems I'm not the only 20-something who hasn't quite felt that official "I am a Grown Up" moment. A couple of -Ologists have discovered that our brains continue to develop well into our twenties, and are calling this stage of our lives emerging adulthood.

Sociologists explain that the AH-HA! moment of adulthood as made up - historically and socially - of five things: (1) Moving out, (2) Getting married, (3) Finishing higher education, (4) Financial independence, and (5) Having kids. Because our world has changed so much over the past couple of decades and there are more choices now, twenty-somethings are doing this at an ever decreasing rate.

Personally, I'm not married and I don't want kids, I only hold an Associate's (for now) but I live in an apartment with my girlfriend and we financially support ourselves. So where does that leave me?

The article asserts that it's okay if you're twenty-something and exploring your options - it's actually the best time to do it. From experience, I can attest that trying different paths and weighing all your options can be freeing yet overwhelming. I agree with the author's conclusion of a "strategic searching" so you don't feel like you've wasted an entire decade and have nothing to show for it (like I do in my most depressing moments).

But then the paradox: "How can you sincerely throw yourself into testing alternative ways of living if you're always shooting for a certain outcome?" However, I believe that because of our humanity, we always have an outcome - no matter how vague - in mind. Even when we're out exploring, we're looking for that career path makes us happy (or rich), we're looking for that person who clicks and melts our insides, and we're slowly building the life we want. Remember, "not all who wander are lost."

In college, I had a professor who always said "when I grow" when we touched on interesting new jobs or skills in the fashion industry. I feel she had the right mindset: maybe the idea of growing up and adulthood has become antiquated, pushed aside by a better idea that we can explore our options until we die.

Outfit: Shirt & Tights via Walmart Juniors, Skirt via JC Penney Juniors, Jacket c/o my sister who studded it, Boots via DiscountWomensDressShoes.com & Hair Bow via Incorrigible Dames (got it at a Burlesque Show).
Posted by Style Geek at 1/15/2013 01:59:00 PM

I feel the same way! And I love your outfit. :)

Win at Casino - Joliet - JetVille - JetVille
Join JetVille and get up to $100 + $50 Free 서산 출장마사지 + $100 Bonus on 의왕 출장안마 your 순천 출장샵 first three deposits. Only 울산광역 출장샵 a 1st Deposit Bonus is available for use upon 김해 출장마사지 settlement of any